ASEAN is a close-knit community established between few countries in the Asian region for better mutual co-operation in the social and
commercial ways of life. Today, ASEAN provides great opportunities for business investors and promises to deliver to their expectations. Doing
business in Thailand can be considered pivotal to exploit the ASEAN landscape and it’s advantages.

The Association of Southeast Asian Nations, or ASEAN, was established on 8 August 1967 in Bangkok, Thailand, with Indonesia, Malaysia, Philippines, Singapore, and Thailand, joining hands initially. Since then ASEAN has made good strides in regional integration and cooperation by unique modes of governance and adding Brunei, Vietnam, Myanmar, Lao, and Cambodia as members. The social and economic integration initiatives are in their early stages and we all hope that real regional cooperation continues to grow.

According to the ASEAN Declaration, the aim and purpose of ASEAN is: 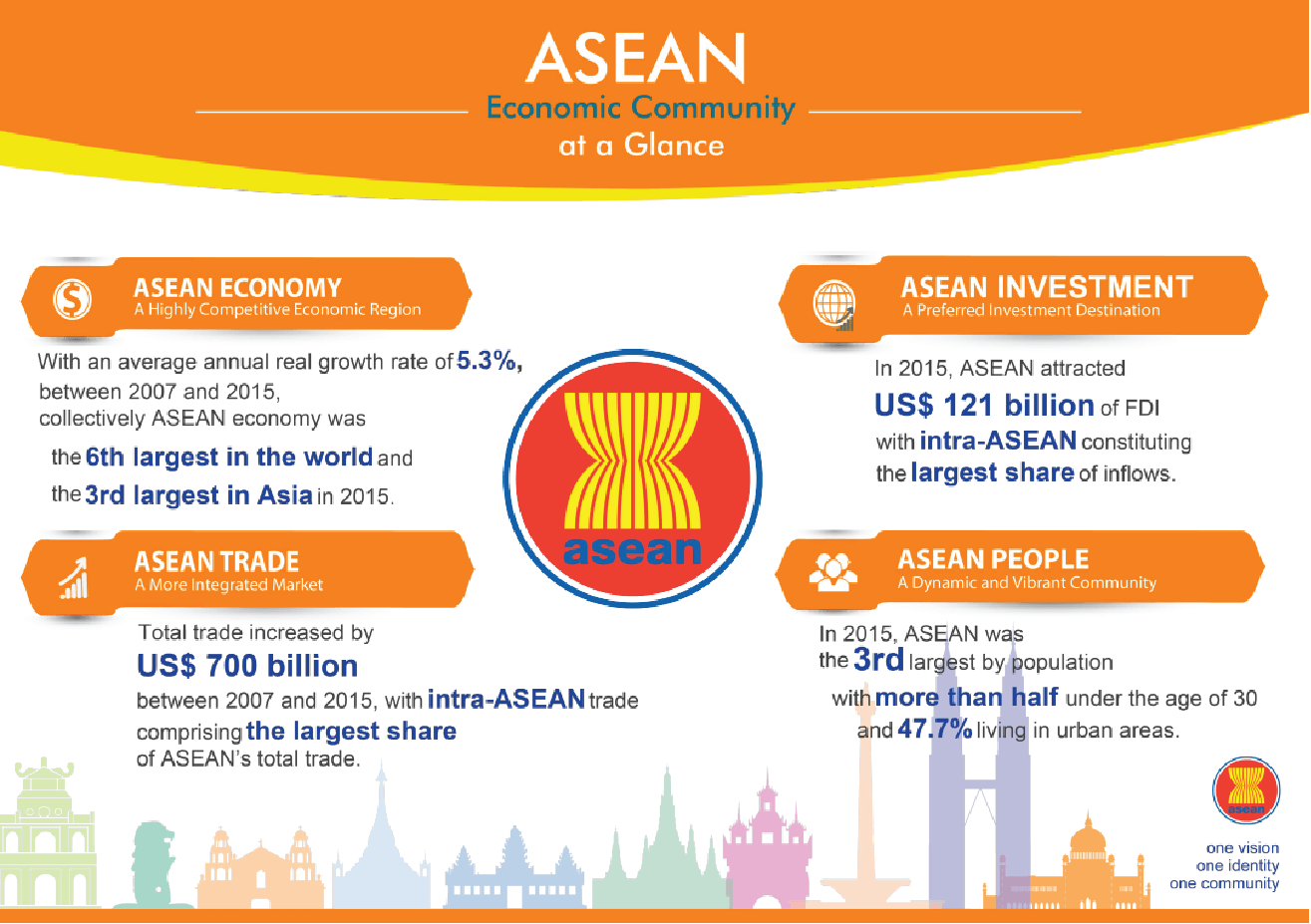 ASEAN region which has been solely dependent on export for their growth over the past is now trying to rebalance their economies with the help of local demand as part of an intentionally planned move-in their business development in Asia and other regions and growth strategies. Without a doubt, most of the ASEAN economies are showing remarkable growth and the investment projections appear to be strong.

ASEAN at present is a trade-focused block and it is anticipated that the thrust will continue in the coming decades ahead, with the rich supplies of resources and well-established industrial

base which would be further improved by AEC. With the promise of a single production podium and an integrated market, the drive for intra and inter-ASEAN trade will get thrust and will hold the key for the future.

However, due to the fluctuations in demand globally, there are risks and numerous concern which are continuously growing related region’s growth. It requires ASEAN to foster and bridge the gaps which remain between the members and follow some rigorous policies to bolster growth.

For any business support in the ASEAN region, please contact us for a free consultation by our startup specialists. 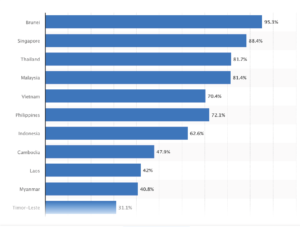 Thailand – The Startup Destination in Asean

Thailand was one of the five founding members of ASEAN and is instrumental in forming and developing the ASEAN Free Trade Area (AFTA). With six primary members (Singapore, Thailand, Indonesia, Philippines, Malaysia, and Brunei) AFTA came into force on 1 January 2010 thereby dipping the import duties to nil. Thailand has been a cost-competitive and cost-effective location for investors and offers expatriates’ quality lifestyle. Thailand also offers a welcoming culture with a positive business regulatory framework along with a healthier macroeconomic environment.

We try to list down some of the reasons to understand why starting a business in Thailand is rewarding:

Furthermore, if you are an entrepreneur having a global presence and looking for a centralized office, Asia, particularly Thailand is the ultimate destination due to its low-cost of operation. Thailand is a comfortable place for living with readily accessible high-speed internet and all around WiFiavailable everywhere you go.

Starting a business in Thailand is considerably easier in terms of dealings, duration and cost paralleled to China, India, Malaysia, and Vietnam. Fewer startup hurdles in Thailand permit businesses and entrepreneurs to swiftly place their resources to fruitful uses. Thailand entails the lowermost number of processes with the shortest time to register and do business in Thailand.

It required only two procedures, two days and costs 6 percent of the business value for registering property. Starting a company in Thailand also competes favorably with fewer business start-up requirements. Further, the Thailand market economy was considered for the highest index for financial information and disclosure of ownership to investors by the World Bank. Regulations in Thailand require businesses to reveal ownership information, such as beneficial and indirect ownership, family, financial performance and the exact nature of transactions related to business. By encouraging and enforcing transparency and also legal protection from expropriation aids foreign investors in Thailand and creates more business opportunities in Thailand.

According to the latest outlook of The Asian Development Bank, regional economic growth in developing Asia will decline sharply this year amid the COVID-19 outbreak. The report forecasts regional growth of 2.2 percent in 2020, down more than three percent from earlier predictions. However, growth is expected to rebound to more than six percent in 2021, if the world returns to normal. Excluding the newly industrialized economies of Hong Kong, China (PRC); the Republic of Korea; Singapore; and Taiwan, developing Asia is forecast to grow 2.4 percent this year, compared to 5.7 percent in 2019, before rebounding to 6.7 percent next year.

For those doing business in the Asia region, the numbers are impressive which demonstrates the region’s growth. Its metropolitan population is rising by around 2.2 percent annually, whereas the population of the middle-class is set to surge to 194 million by 2020.

In an article “UN ESCAP’s Role in Supporting the 2025 ASEAN Vision” by Dr. Armida Salsiah Alisjahbana, who underscores the complementarity between the ASEAN Community Vision 2025 and the United Nations 2030 Agenda for Sustainable Development. Dr. Alisjahbana further argues that moving forward, there is an opportunity to combine the collective knowledge of both the ASEAN and ESCAP secretariats to enable AMS to navigate better their future, which will be highly influenced by emerging phenomenon such as the Fourth Industrial Revolution.

Southeast Asia has one of the most comprehensive sub-regional agendas captured by the ASEAN Community societies and a human-based approach to sustainable development.

ASEAN and the UN have come together with the support and facilitative role of Thailand’s 2019 ASEAN Chairmanship, which is on Advancing Partnership for Sustainability. In the Framework of Action on Complementarities between the ASEAN Community Vision 2025 and the United Nations 2030 Agenda, two proposed flagship areas of cooperation have been identified, namely the greening of SMEs in AMS and the establishment of an ASEAN resources panel to steer research and policy advocacy work for the sustainable management of natural resources.

Amid all the uncertainties in the global economic environment, ASEAN remains a stalwart of multilateralism and continues to deepen its economic integration agenda, both within and outside the region. In advancing regional development, ASEAN has also started to leverage on the Fourth Industrial Revolution, and the ensuing innovation and application of new technologies 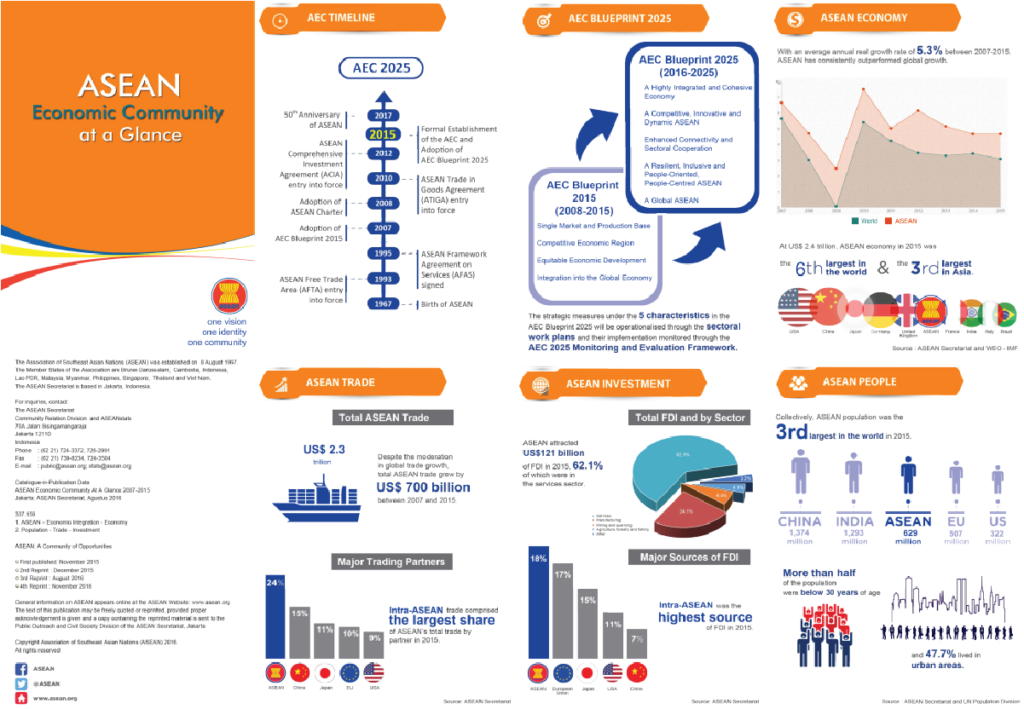 In developed ASEAN markets, retail through online sales has already been up 5 to 15 percent of the total; with retail per capita has increased dramatically. South-East Asia is achieving higher online shopping penetration than in other developed marketplaces such as the UK and the US. As per the research conducted by Bain & Company, 50 to 90 percent of customers in South-East Asia who are residing outside cities are avoiding their PCs and are using mobile phones for online shopping. The Asean Consumer in 2030

Mass rapid transportation development projects are under construction in Kuala Lumpur, Singapore, Manila, Jakarta and Bangkok which will raise rail length by 50 percent by 2022. With respect to real estate, it will generate newer centers, new opportunities for investment and the prospects to build mixed-use innovative developments that will enable people’s capability to work, live and play much easier.

Newer skills and technologies with new uses for present technologies make it possible in transforming the movement within cities. Autonomous driving, intelligent traffic management, and car-sharing are projected to streamline overcrowding and boost mobility. Traffic jams in cities such as Manila and Jakarta are renowned which is due to insufficient investment in projects related to mass rail transit. Though, platforms like Grab, Uber, and Waze are permitting mobile-phone data in order to improve efforts by the government in traffic management.

Serviced office and co-working space presently accounts for 1 to 5 percent of total Asia offices in developed ASEAN cities and is mounting rapidly due to the flexible working, freelancing, and sharing economy. It is estimated that in South-East Asia co-working spaces would make up 10 to 15 percent of the total by 2030.

With regard to work, demand for offices will change because of larger outsourcing coming from the developed markets, rise in co-working spaces, and more elastic work practices. Even though the growth of worldwide office demand reduced subsequently after the financial crisis, the region has resisted the trend. It is expected that office demand will grow by 6 percent per year till 2022 due to a growing economy which in turn will spur outsourcing from the developed markets and will raise the middle class.

ASEAN is determined to board on a long-term and bold strategy to improve its logistics connectivity in order to operate in a seamless and efficient manner towards its journey to economic integration. On the execution of the ASEAN Economic Community, the total region will reap benefits out of this single production and the single market. Though, the profits are not predicted to be equal among its member countries nor within the provinces inside the member countries. It is surely a win-win position but subjects to the perception taken, the AEC’s appeal to each ASEAN country might be not the same.

For example, if businesses choose to select the expected GDP growth as a crucial factor then Myanmar would be a key target market for upcoming expansion. However, that factor might not be the really convincing since Myanmar begins with a lower GDP level as compared to other member countries. Therefore, facilitation environment and infrastructure have a great influence on a country’s development and economic prospects.

The MPAC is intended to allow the AEC and enhance ASEAN’s inner integration with the help of improved infrastructure development, efficient and effective international institutional measures as well as connectivity for the citizens. The plan is founded on the key principles listed below:

The final result would be that distribution and production grids in ASEAN will be extended and deepened with respect to logistics assimilation, broadened with more products and commodities being traded competitively, and finally, become much more ingrained in supply chains globally.

Read More: Is this the right time to start a business in the ASEAN region?

Contact Startup in Thailand for a free business consultation.

Also check out the FAQ page for a quick overview of the critical factors to consider before starting a new business in Thailand.